At Issue MD - When will Maryland return to the office?

When will Maryland return to the office?

The impacts of the COVID-19 pandemic have permeated every aspect of our lives. We have been forced to adapt and pivot on many levels, but nowhere has that experience been more dramatic than the workplace. From shutdowns to the designation of essential workers to managing slow and inconsistent returns with social distancing, masks, and new cleaning and sanitization protocols, office properties continue to ride a roller coaster of unpredictability and unforeseen obstacles back to normal operations.

The shockwave of workplace shutdowns has sent ripple effects through the community, with long-term implications for local government tax revenues, placemaking in our downtown corridors, and the health and viability of ancillary and retail businesses who cater to and serve our weekday crowds.

So when can we expect Maryland to return to the office and what does the “new normal” look like?

AOBA examined current occupancy rates and trends and called on the observations of owners and managers of roughly 82 million square feet of commercial office space across nearly 400 office properties throughout the Washington metropolitan region. Here is what we found:

Kastle Systems is a leading security provider in the commercial office sector. Through its “Back to Work Barometer,” Kastle has been tracking keycard, fob and building access data to identify trends in how Americans are returning to the office. 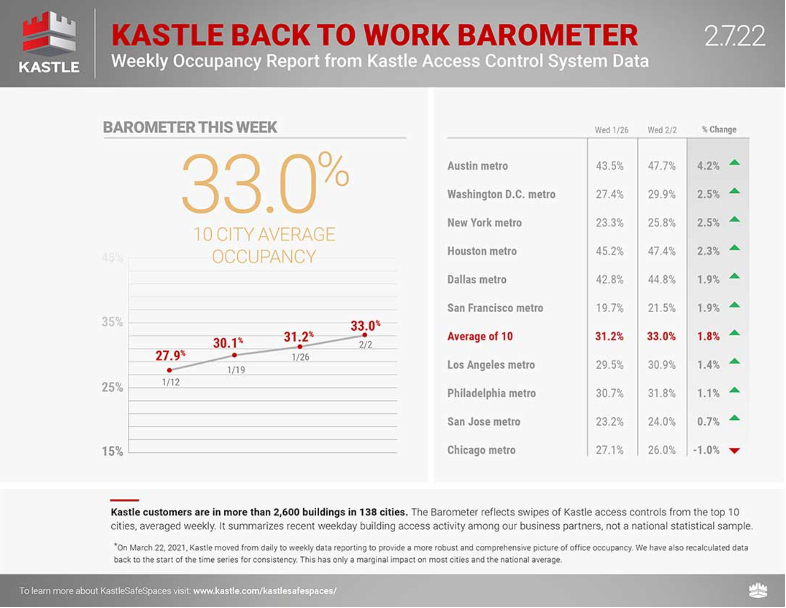 Consistent with other areas of the country, the Washington metropolitan region continues to see a slow uptick in the number of employees returning to the office. But current office occupancy remains low, at less than 30%.

The Delta and Omicron variants set back return-to-work plans 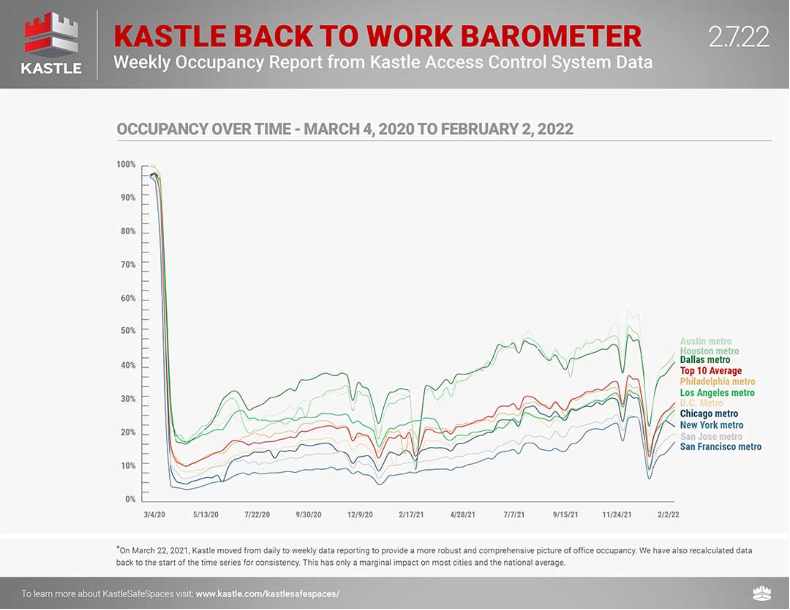 The recent surges in COVID-19 cases brought on by the Delta and Omicron variants had a significant impact on local businesses’ plans to return to the workplace. While occupancy rates have begun to slowly trend back upwards, we remain far behind where we were just a few weeks ago. For context, twelve weeks ago, in mid-November, the national occupancy rate was 38.8%. That number dropped all the way to 27.9% in mid-January, a decrease in occupancy of more than 25% in response to the Delta and Omicron variants.

Observations from property managers on the impact of the Delta and Omicron variants:

When will the occupancy rates return to pre-pandemic level?

There is no data set surrounding building tenants’ plans to bring their employees back to the office. But owners and managers of commercial office buildings anecdotally point to late spring/early summer as the new projected timeline for tenant businesses to begin returning their workforces to the office in numbers approaching pre-pandemic levels.

Observations from property managers on the projected timeline for re-occupancy:

Hybrid work options are here to stay, but will not replace in-person

“One thing that COVID has taught the conventional office user is that there is a certain segment of the workers in an office that don’t need to come in five days a week.” While policies will obviously vary from office to office, it is clear that telework arrangements and hybrid work policies will remain long after the pandemic has ultimately subsided.  But this does not mean that businesses will no longer require a physical presence.

What does all of this mean for the future of Maryland's office market?

The region’s largest commercial office building owners and managers say that it’s still too early to determine the long-term impacts of the pandemic on the office space market. But we have not yet seen significant retractions in tenants’ demands for office space or changes in physical layouts. The significant presence of government agencies and contractors in Maryland, as well as its largely knowledge-based economy, have contributed to its resiliency in the face of a profound and sustained disruption in the marketplace. But recent guidance from the Office of Personnel Management encouraging permanent telework for all federal agencies is worrisome. GSA’s Public Buildings Service Commissioner Nina Albert has indicated that “federal agency officials expect to reduce their office space needs anywhere from 20% to 50% following the pandemic.”  In late January, the Congressional House Transportation and Infrastructure Committee was made aware that 40% of GSA leases are set to expire over the next four years.  GSA Administrator Robin Carnahan told the Committee that if funds were made available to repair federal buildings they could potentially move the affected agencies into Federally owned space.

At Issue is compiled by the Apartment and Office Building Association (AOBA) of Metropolitan Washington, and is intended to help inform our elected decision-makers regarding the issues and policies impacting the commercial and multifamily real estate industry.

AOBA is a non-profit trade organization representing the owners and managers of approximately 172 million square feet of office space and over 400,000 apartment units in the Washington metropolitan area.  Of that portfolio, approximately 61 million square feet of commercial office space and 151,000 multifamily residential units are located in Montgomery and Prince George’s County, Maryland.  Also represented by AOBA are over 200 companies that provide products and services to the real estate industry.  AOBA is the local federated chapter of the Building Owners and Managers Association (BOMA) International and the National Apartment Association.

Along with input provided by AOBA member companies, the following data sources and references were used in compiling the attached report:   AOBA strives to be an informational resource to our public sector partners. We welcome your inquiries and feedback. For more information, please contact our Senior Vice President of Government Affairs, Brian Gordon.